A small school with a big heart....

This term we are focusing on castles through time,the Tudor kings and queens and to compare the reign of Queen Elizabeth I to Queen Elizabeth II; to learn about the impact of these people on daily life. Looking at Heroes and Heroines – How have significant British people and characters influenced our daily lives?

This term Class One have been learning about the Olympic Games. We used pictures of pottery from Ancient Greece to investigate the sports that men competed in as part of the Ancient Games. We have investigated our senses as part of our science work, tasting and guessing flavours of crisps and testing materials to make ear muffs.

In Literacy we have been researching and writing about animals that live in the rainforest, creating our own glossary of animals. More recently, we read the story “The Great Kapok Tree” and wrote our own stories based on it, substituting our own choice of animals.

In RE this term we have talked about how people show that they belong to a religion. As part of our work we took baby Isobel to St Mary’s Church to be baptised. Rev Kathy told us about the baptism service, showing us how the sign of the cross is made and explaining why water is poured over the baby’s head.

This term our topic is Food and Farming.

Class One have been investigating how our food is produced and where it comes from. As a home challenge over Christmas we looked at the special Christmas food we had enjoyed and found out where it had come from. Lots of the foods came from local suppliers but some of them had come thousands of miles like the Brazil nuts! 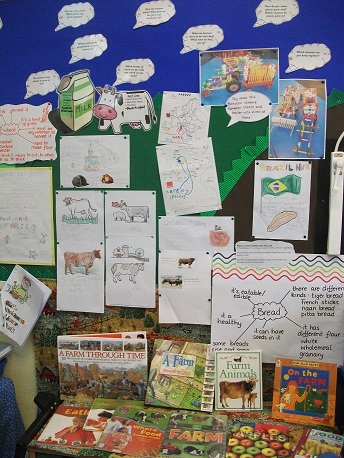 In Literacy we read the story of The Enormous Turnip, acted out and then wrote our own stories about enormous vegetables. Our role play space has been a farm shop and is now a barn, including some animals and farmers! 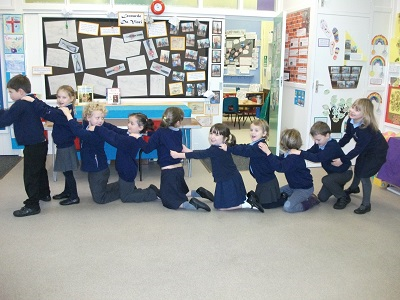 As part of our work in science we have planted some seeds and bulbs in different conditions and are waiting to see how quickly they germinate and how they will grow. We have already discovered that water is really important for germination.

In R.E. we have been talking about celebrations.

We held a birthday party for Spencer bear and particularly enjoyed helping him eat his birthday cake. 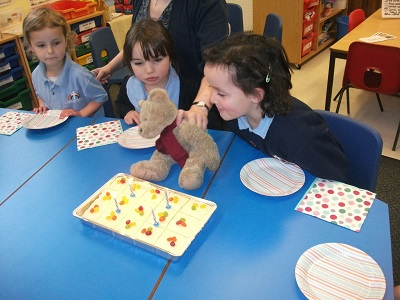 On Wednesday, 2nd March, Class 1 celebrated a wedding they had organised as part of their RE work on celebrations. The children sent out their own invitations and wrote their own order of service including vows. 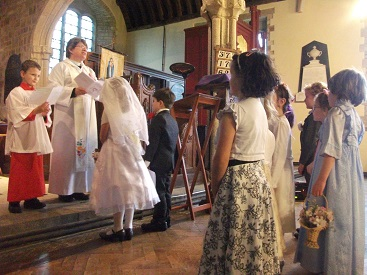 Parents and friends came along to St Mary's Church, where Sidney took the role of priest. Rev. Kathy Roberts explained the different sections of the service and the children all took a role, having organised appropriate costumes to wear. 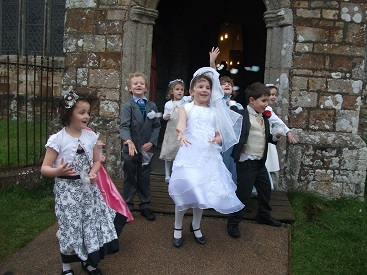 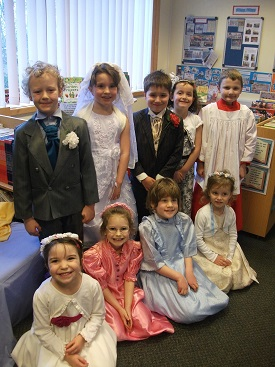 Following the service, the wedding party and their guests returned to school for a reception including wedding cake, toasts and speeches by the bride's mother, groom and best man. A lovely morning was had by all!

Our topic for this term is "Inventors and Pioneers''- How have they changed our view of the world?

During this half of term, Class One have been reading ‘Charlie and the Chocolate Factory’, as Mr Willy Wonka was a wonderful inventor of chocolate and sweets. (Our topic for the term has been inventors and pioneers.)

In Literacy, the children have written character profiles, invented new characters and created new, unvisited rooms in the chocolate factory. This helped them write a brand new chapter for the book. More recently, the children have been researching and writing recipes.

The children have also undertaken a number of challenges related to the Chocolate Factory role-play area: individual lollipops, huge collage lollipops, ever-lasting gob-stoppers and ‘invent your own Wonka chocolate bar’!

The children have really enjoyed the Literacy sequences and using the role-play space to fire their imaginations.

We created a display about pond animals. Most of the work was part of our Easter holiday homework challenge.

We have been creating tally charts of the animals we have observed in our nature hide.

Our topic for this term is "Predator V Prey'- How do animals survive in the world of water?

So far this term we have been learning about animals living in ponds and rivers. As a home challenge, we made models and created pictures and collages of pond animals to make a display. Our role play area has become a hide, where we can observe river animals. We have webcam footage to view and tally charts to keep records on. We worked in groups of three to research a river creature that interested us and presented our findings to the class and in assembly using these giant posters.

This term our key question for investigating is

'What was it like to be a child living in WWI?'